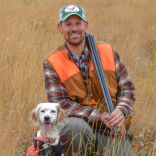 Brad Trumbo is a federal fish and wildlife biologist, outdoor…

I had never hunted doves with a dog, nor did I intend to this day. But an English setter pup needed some birds in her face as badly as I needed to kick off the 2019 upland bird season. Not to mention that I had a new CZ Bobwhite G2, chambered in 20-gauge sitting in the safe in need of breaking in. I had never shot or owned a double gun new enough to have interchangeable choke tubes, so I dropped in improved cylinder and modified to get started.

My setter pup, Zeta, and I stepped from the truck and began walking a tree line on public ground frequented by Eurasian collared doves. The plan was to walk ‘em up and let the pup “retrieve.” The lock on my Tundra barely chirped when a collared dove circled a tree in front of us. Dropping Zeta’s leash, the CZ came quickly to shoulder — and just as quickly dropped our first bird of the season and the first with the Bobwhite G2. Zeta failed to retrieve, but the significance of fresh feathers on her muzzle was clear.

That hunt back in August was simply the beginning of a working-class love affair with my Bobwhite G2. My overall infatuation with side-by-sides, and the intense care (read: fear of use) that I put into my older guns, led me to rationalize my need for a new version. My criteria? Reliable enough to carry daily during the upland season, yet basic enough to endure anything Mother Nature would throw at us without worry of scratches, dents, or stock injuries.

To avoid scope creep and picking up another gun that would only hunt under bluebird skies, I drew a hard line at $1,000 for the next tool in the box. This significantly narrowed the field, leaving Stoeger and CZ as the most readily available and making the choice clear. The CZ Bobwhite G2 held the name and reputation. I could have fudged a little over for the CZ Sharp-tail, but I wanted to see what the Bobwhite G2 had to offer at a meager $649.

CZ has a long history of quality and reliability for the price, not to mention the original Bobwhite was produced prior and discontinued in 2015, yet reintroduced in 2019 as the G2 model based on the popularity of the original version. Designed with a trim English-style, Turkish walnut stock, these babies are crafted on gauge-specific frames, providing a sleek profile and cutting weight. At 7.3 pounds, the Bobwhite G2 feels virtually weightless in comparison to lesser quality or vintage side-by-side shotguns.

As with other CZ doubles, the Bobwhite G2 receiver is milled from a single steel block using a “computer numerically controlled” (CNC) mill for precision. The box lock receiver houses modern firing components that “. . . slim the action while increasing longevity and reliability.” The same can be said for the black chrome finish, which will “. . . resist rust much better than a blued gun while still looking classy.” Interestingly, the black chrome finish on the receiver maintains the character of traditional blued color-case hardening. Quite charming, contributing significantly to the classy appearance.

Double triggers remain the standard for a side-by-side, yet popular preference for a single-trigger mechanism has seemingly diminished the practicality of double triggers for split-second choke selection. Given the Bobwhite G2 is built with gauge-specific frames, the double-trigger design fits the gun well. No awkward reach to the forward trigger here, something that may be experienced with older or larger-framed side-by-sides.

Despite the myriad pros of picking up the Bobwhite G2, I held onto my cash until handling the gun. Standing six-foot-seven, not just any ole scatter gun off the shelf will fit even reasonably well. Hence, my skepticism ran high as I rolled the slender double under the fluorescent lights of the gun shop. Just as great was my shock upon shouldering the gun for the first time.

The astounding lightweight feel of the gun, fit of the trigger placement, and butt-pad and rib alignment to my shoulder and cheek were as near perfect as I had experienced, bested only by my classic L.C. Smith. I repeated shouldering the gun several times, thinking “It can’t possibly fit this well.” But it actually did. I immediately paid the clerk, vacating the store with a smug feeling, as if closing a deal so sweet it was nearly theft.

Not only am I pleased with the look, function, and feel of the Bobwhite G2, it comes chambered for 3-inch shells and packaged in a snazzy hard case with five shotgun choke tubes of Cylinder, Improved Cylinder, Modified, Improved Modified, and Full. And, true to intent, I put the Bobwhite G2 through the ringer during the 2019-2020 upland season, where it earned the affectionate moniker “The Bob.”

Following our early dove hunts, we took to the grouse woods, then hunted across the Washington Palouse, bagging pheasant and a handful of California quail. We traversed the flooded PLOTS and Sheyenne National Grasslands of southeast North Dakota. We strolled through over-grazed, cactus-laden BLM lands in eastern Montana where I put my first sharp-tailed grouse in the vest. We seized opportunities to pick off pigeons as flocks accosted us while we pushed cagey, late-season roosters through riverside bunchgrass.

Throwing caution to the wind, The Bob endured barbed wire, boulders and outcrops, rain, snow, wind, dust, and mud as I laid it across fence lines, the tailgate or on the ground alongside dogs and birds for photos. The rib (and my truck) boasts a scar from a Montana wind gust that slammed the truck door against the gun butt, launching it across the center console and nearly through the driver’s side window. The stock bears wounds from bumping boulders chasing chukar and Huns and busting brush.

The Bob has seen more action, fired boxes of shells, and brought more birds to the vest in a single season than any other gun in my safe over the past five cumulative seasons. What will I have to say about it in 20 years? I’m excited to find out, but expect I’ve just said it all.

Check the shotgun out on CZ-USA

A Closer Look at the Project Upland Crowd – Sourced Shotgun

Upland Shotguns – Which is right for bird hunting? 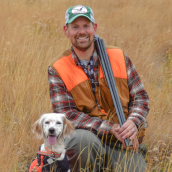