Home » Firearms and Shooting » Shotguns » A Love for the Fox Sterlingworth 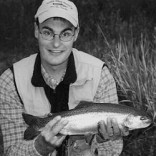 “No better gun was ever made.” — President Theodore Roosevelt

On October 14, 2017, I received a text message from my brother, Shawn Wayment, DVM: “You around? Need to tell you sum’n you’re gonna C-rap duder.”

I responded that I was home and Shawn immediately called me to report that he had just bought me a 16-gauge Fox Sterlingworth with an English straight grip.

“Santa came early for you!” he exclaimed. Needless to say, I was elated by the good news and at a loss for words.

Regarding the gun, the online advertisement stated:

Here’s your chance to get a straight grip Fox small bore at a fraction of the cost of a factory Skeet & Upland or a custom Fox small bore. This Sterly started out as a very early Philadelphia 16-gauge Sterlingworth. Just looking at the work I’d say some gunsmith did it up in the late 40’s or 50’s. Has 26-inch tubes with factory keels intact and both bores at .658” diameter (factory sizing) and no evidence of past dent removal and no pitting, both bores are excellent. Chokes are .006” Right and .013” Left. Barrels are tight on the face, ring well and lever is still way right. Has 2-3/4” chambers and extractors. Color case is mostly faded. She weighs 5-15 on a digital scale. The stock has been modified by splicing matching walnut onto the comb and the dimensions are now: 2-1/4” drop and a 14-1/2 length of pull to a vintage recoil pad. Neutral cast. Another piece of walnut was spliced along part of the toe line to include a Parker-type shield with the initials “TM”. Checkering was redone to coordinate with the straight wrist. If only these guns could talk. . . .

As a ruffed grouse hunter and a lover of American history, I was intrigued by the description of this gun and its story. Here was a gun from the golden age of vintage side-by-side shotguns from Philadelphia, the very cradle of American Freedom, which sounded like the perfect gun for the grouse woods.

I contacted the seller, Frank Srebro, to see if he had any other information on the gun, and he responded:

“Andy, I got it from a friend who found it in NY but he wasn’t able to find out any history on the gun.  I assume it was used for grouse and/or woodcock.  Judging from the work I’d say that it was converted to straight grip in the 40’s or 50’s.  The trail is usually cold on these guns . . . .  “

After receiving this response, I read everything I could find about A.H. Fox and the Fox Sterlingworth on the internet and in books. By all accounts, Ansley Herman Fox was a real character. He was an excellent competitive shooter, but nothing I read made me think he was much of a hunter. At a young age, he invented and patented his own shotgun and started a few gun companies. The first, Philadelphia Arms, went belly up quickly. The second, The A.H. Fox Gun Company, stayed around much longer, but not with Mr. Fox at the helm.

Fox’s target market for his guns was the well-to-do and his first guns were based upon a graded system. The company advertised his guns as “the finest guns in the world” and Fox believed it. His company set up booths at the big shooting competitions in hopes of drawing the right customers. Probably the most famous Fox gun was a gift to Teddy Roosevelt after he left office and went on African safari, an elaborate FE Grade. Of this gun, Roosevelt praised in a letter to Fox: “I really think it is the most beautiful gun I have ever seen.” No doubt, Ansley H. Fox swung for the fences!

Without Michael McIntosh’s biography, A.H. Fox: The Finest Gun in the World, we wouldn’t know much about the man. Interestingly, Fox wasn’t too keen on the idea of creating an affordable gun for the working man. We know this because when the first Sterlingworths came out in 1909, Fox refused to have his name associated with the guns. Sterlingworths were stamped as made by the “Sterlingworth Company of Philadelphia,” even though no such company existed. Despite the ruse, Fox’s true colors shined through as the Sterlingworth was touted as “The Finest $25 Hammerless Shotgun in the World.” By 1910, Fox decided to claim the guns as his own and stamp them as made by the A.H. Fox Company of Philadelphia.

The truth is that the Sterlingworth was based mostly upon the same patents as all of his other graded guns. McIntosh wrote, “The Sterlingworth is mechanically identical to graded Fox guns—using the same cocking and fastening systems and the same three-piece lockwork—but its fore-end latch is different.” In other words, when you buy a Sterlingworth, you are getting the same thing as one of his graded guns. The differences are mainly cosmetic. McIntosh emphatically wrote, “Even at full retail of $25, the Sterlingworth represents the greatest value ever offered on the American gun market before or since.” That’s high praise from one of the greatest gun writers of our time.

The first Sterlingworths were all 12-gauges. Before the company implemented its plan to produce 20-gauge and 16-gauge Sterlingworths, on March 21, 1912, A.H. Fox was ousted from the company that bears his name. The company began producing 20-gauge and 16-gauge shortly thereafter. While his tenor with the A.H. Fox Gun Company was short-lived, there can be no doubt that his guns have impacted the shotgun and hunting world ever since.

Starting on Saturday, October 21, 2017, the Wayment Brothers began our annual week-long hunting excursion in southern Idaho. Before the hunt began, Shawn arranged to have the gun shipped to Meridian, Idaho by Monday, October 23. Upon handling it for the first time and opening and closing the action, I was amazed at the grace, beauty and quality in my hands. Interestingly, the gun is lighter than my Ithaca NID 20-gauge.

In his book, Game Gun, Richard S. Grozik wrote something that captures my initial impressions of the gun perfectly: “There is something very comforting about the sound of a Fox action camming shut. The rotary bolt locks with decided authority, giving the hunter a feeling of security and peace of mind as he steps into the field.” It certainly lived up to all of the praise I had read.

Based upon my research, my shotgun was made in 1913, the very first year the company produced the gun in 16-gauge. It’s awesome to think that something over 100 years old holds its beauty and can still be utilized today. Now that is American craftsmanship at its best!

I thoroughly enjoyed hunting with the Sterlingworth during my week-long hunt in Idaho in October and throughout the rest of the season, for that matter. During one of our last hunts in October for blue grouse above 10,000 feet, I wrote the following on my blog:

Ron Coiro and I postholed through the crusty snow hoping to find a few blues in the Piney Strip. With the snow, the cover looked harsher than usual and I’m guessing that Ron wondered if this was the equivalent of an Idaho Goose Chase. Experience has taught me, however, that it was only a matter of time before we’d find a few blue bombers.

About a half mile down the Strip, the trees and the snow petered out into a sage brush opening and I had that sixth sense that, if any were around, the birds were near. I then looked down at the thinning snow and saw fresh grouse tracks. Rainey and I followed the tracks, and within twenty yards, a big blue flushed across the opening and I missed the first shot. However, another grouse flushed and followed the exact same groove as the first. I swung the Sterlingworth again, slapped the back trigger, and the big bird folded. As I was reloading, another bird escaped unmolested. For me, this was my favorite moment of the whole week.

I’m sure A.H. Fox would be proud to know his workingman gun still works. Admittedly, during the hunting season, I missed quite a few birds due to operator error, but can attest that when aimed true, the gun hits hard.

As I shared photos and spoke about my Sterlingworth on social media last fall, a friend, Robert Poor, @borderland_upland, said something about Fox guns that cracked me up:

“It may be an urban legend but I hear that birds die with a smile when shot with a Fox shotgun and whispers of Teddy Roosevelt saying ‘Bully!’ can be heard in the fresh smoke-filled wind.“

Whether or not this is true, I cannot yet say. But my Sterlingworth definitely brings a smile to my face as I tote it around the grouse woods and I may start yelling “Bully!” when I connect on a bird.

L.C. Smith Shotguns – A Look into the History of Double Guns