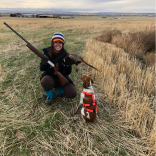 Habitat management, fire, and other factors can alter you access to your normal hunting spots and that’s a normal part of hunting

The first day of bird season is always filled with nervous enthusiasm. Will it begin strong, promising a good start to a great year? Or will it ramp up slowly, requiring a prolonged courtship with Lady Luck to get a bird in your bag?

Last year was my fourth year hunting. I was finally feeling confident in the field and anxiously awaiting for grouse season to kick off. In anticipation, I went scouting, worked with my pups, and got into shape. I opted to begin the season at my favorite spot, lovingly nicknamed Hill Top by me and my hunting comrades. The butte-like knob starts with a swift incline before leveling out into meadows with prime habitat and loads of birds.

At the break of day, my dogs collared and ready to go, I pulled off the highway onto the dirt road leading to Hill Top. My heart sank. Earlier that week, the forestry management company, the owners of that public hunting access property, closed Hill Top for logging.

Regrouping was tough. The wind was nearly taken from my start-of-season sails. After some time, I turned toward another known place. I managed to salvage a half-hearted hunt; it was mostly for the dogs. Even now, looking back at that opening day, I recall the gut-wrenching sight of Hill Top. It still makes the pit in my stomach return as if it were yesterday.

That year was a particularly challenging one. A record-breaking wet spring during nesting season hit the pheasant hatch hard. The roads into a bunch of properties didn’t fare well, either. Forest fires had been brutal in the Pacific Northwest, burning hundreds of thousands of acres of grouse and quail habitat. The heat dome really did a number on chukar and Hungarian partridge numbers, too. Then, on top of it all, there was the logging. Even though this happens regularly, it was just the first time I felt the impact personally.

Normally, I have a whole slew of locations and species to choose from. It was a new experience for me to not know where to go. It felt like starting back at the beginning. Having a season with so many cards stacked against me, I strategized new ways of finding birds.

Although a previously abundant place may not currently be viable, lands surrounding it still might be. Unquestioningly, make sure it is legal for you to be there first. With that said, when there are fires, logging, or other causes for habitat loss (temporary or permanent), the birds have to go somewhere else. Often, they don’t go as far as one would think.

Untouched property, owned by the same management company, just a mile away from Hill Top turned out to be quite the grouse haven. The learning curve to hunt the new ground was moderate, but attainable. After a few hunts, it began to feel familiar. Still without a name, it is no Hill Top. Grouse seem to like it, though, and that’s enough for me.

A word of caution: don’t kill birds whose numbers are obviously abysmal. Give them a break. Check back next year. The last thing anybody wants is to decimate the few remaining of a dying brood. Don’t be part of putting the final nail in that coffin and use self restraint on bag limits.

Get to Places on Foot

When roads get washed out, damaged or blocked with barriers, snow or fallen trees, let your boots do the work and walk in. Hiking to an otherwise inaccessible location means fewer people, if any, and usually a whole lot more birds. Again, don’t go anywhere that isn’t open to public access unless you have explicit permission from the landowner.

I’m still on the mend from last season’s troubles. Over the summer, I happened upon some amazing grouse numbers while backpacking. Guess where I headed first thing this season?

Leaving a treasured spot behind, one that feels like it’s part of you, is akin to losing a close friend. On the other hand, finding an unknown, bountiful land is like making a wonderful new companion. Exciting, unfamiliar places certainly don’t replace lost ones. Alas, they do help smooth the transition.

High-value resources are imperative in finding new hunting grounds. I recommend starting with an interactive topographic mapping app like OnX. Getting an idea for the lay of the land, elevation, possible driving routes in, and the property’s hunting access is just a click away. OnX also provides links to rules and regulations for some public lands. Pick three or four locations from the couch then head to the field to see their potential in person.

OnX guided my husband and I way farther out of our normal hunting areas last season. We had a great time taking long drives, finding new places, and car camping in the cold. Not all of the trips ended with birds in our bags. But, a few of them did, which made the rest worthwhile.

When a species pulls on heartstrings, hunting a different bird feels somber. Ruffed grouse do this for me. Don’t get me wrong, I love pheasant, chukar, quail and Huns (although I’ve never been fast enough to connect with one) The King holds a special place. Sadly, last year, ruffed grouse seemed to be out of reach. Rather than pull my hair out fretfully trying to find them, I pivoted.

By the time snow was flying, high-elevation hunting was no longer feasible. That’s when quail became the game of choice. Those cute little hairdos seemed to be bobbing everywhere. Normally, getting into quail was incidental; it happened while I looked for pheasant or chukar. However, last year, when the opportunity presented itself, I would always turn aside to hunt quail. Foolishly, they never seemed to be the original reason I was in the field. That quickly changed when my go-to species were struggling. Quail became the primary focus and I had a blast. So did the dogs.

Funnily enough, I stumbled upon a ruffie while quail hunting and again during a late-season chukar hunt. Theoretically, they really shouldn’t have been there. It just goes to show, in my life especially, The King reigns supreme.

Backpacking, rafting, mountain biking, jet boating, skiing, snowshoeing, and more can all be means to get farther into the backcountry during bird season. Lots of folks never think to combine outdoor sports with bird hunting. Do it! Remote places can, surprisingly, become very accessible.

Early season backpacking upland hunting trips can be a game changer. My preferred method is to hike in, set up base camp, then hunt from there each day. It’s a bit tricky climbing through grouse country with a full load on your back.

Take Solace in the Ebb and Flow of Nature and Habitat

With fires burning all around the PNW right now, I am continually reminded that lands we have access to are always in flux.

Saying “It’s a part of life” doesn’t bring much comfort, even when it’s true. In this case, understanding the benefits of flooding, logging, and forest fires takes the sting out a teensy tiny bit. But it doesn’t remove the heartache. Knowledge does help intellectualize sorrow, though.

Thankfully, I have been able to hunt lands that are recuperating. I’ve seen grouse numbers improve with the growth of new samplings and change in cover density. I’ve heard more turkeys than ever before in freshly cut timber, Hill Top included. I’ve watched the migration of the chukar and Hungarian partridge with shifting river levels and temperatures. Upland birds really are marvelous critters.

Nature and habitat aren’t static. They are ever growing, changing, dying, and being reborn. Even when it’s human caused, the ground seems to rebound, if given the chance. It’s inspiring.

Losing places also motivates public land access and management advocacy, encourages limiting as much man-made damage as possible, and, above all else, reignites cherishing the habitat and birds it supports. They are precious, vulnerable, and irreplaceable.

It’s okay to mourn lost hunting grounds. Full stop. Anger, sadness, and disbelief are all natural feelings. Land loss is a huge bummer that cuts to the quick. Grief takes time and so does recovering from losing loved places we can no longer tread.

Though the pain is deep, there is often a silver lining, if only a faint glimmer, that keeps us dedicated bird fanatics heading back into the uplands. As long as we remain diligent stewards of the land we can find peace in knowing nature is resilient and those little birds are tough as hell.

I can’t wait for the day when I hear drumming at Hill Top again. 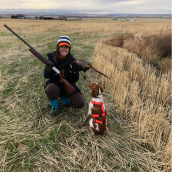